﻿If you are new to beef farming or have never taken the time to learn about genetics and what they mean, below is an outline explaining the basics along with a demonstration of one of our herd cows.﻿
In New Zealand BREEDPLAN is the national beef recording scheme and is used for a variety of breeds including Herefords, Angus, Brahman and Charolais. This program collects information about individual animals for desired genetic traits which are relevant to beef production.  This information can then be directly compared against the genetic base for that breed, giving an estimated breeding value  (EBV) for that animal.

BREEDPLAN is used in a variety of countries including Australia. It is also being used increasingly in the United States, Canada, United Kingdom, Hungary, South America.

BREEDPLAN uses the most advanced genetic evaluation system in the world and Stud Breeders invest considerable time and money into supplying accurate data to the BREEDPLAN program. The EBVs gained from this data provide valuable insight to an animals breeding potential.
EBV's are generated for a range of economically important traits including growth, fertility/calving and carcass.

Please note: You cannot compare EBV's with different breeds as they are created from entirely different genetic bases.

Below is the full set of EBV's for Flagstaff Alberta G32. From looking at this table we can see the Estimated Breeding Value for Flagstaff Alberta and directly compare these with the Breed Average. EBVs are reported in the same units as the measurements are taken and it is assumed half of the EBV will be passed on to the animals progeny. From the below example we can assume, with 75% accuracy, that all progeny from Flagstaff Aberta will be 61kg heavier than the genetic base at 600 days, or 27.5kg heavier than the current breed average.

Another tool allowing quick comparisons which highlight the genetic breeding value of an individual is to look at the percentile graph. This shows all the EBVs in percentiles, the centre of the graph being the breed average for calves born 2 years earlier. Each year Aberta has a calf, this calf's set of EBVs will be entered into the BREEDPLAN system, hence increasing the accuracy of her own EBV set. The more progeny and relatives an individual has, the more accurate the set of breeding values becomes. 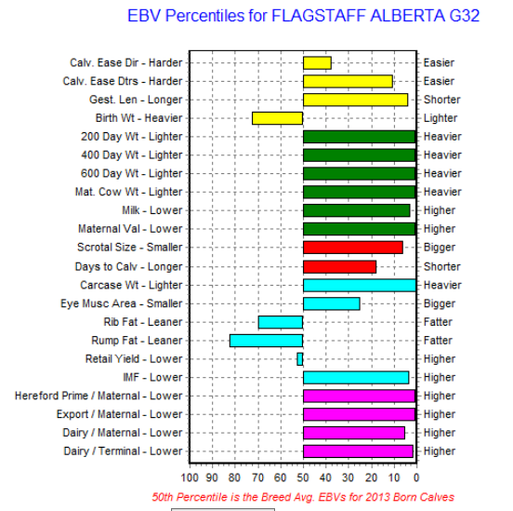 EBVs are calculated using a very sophisticated scientific system which uses all data available, from both the individual as well as any relatives, and multiple calculations to predict the most accurate breeding values as possible and eliminate any environmental bias. Many environmental factors , namely feeding, can influence the physical appearance of an animal which can lead selection astray as these appearances are not hereditary. Using EBVs we are able to select for real genetic traits embedded in an animals genes that will be passed on to its progeny.
If you have any questions relating to the EBVs in the Flagstaff herd, please contact Thomas Condon- Breeder and owner of Flagstaff Herefords. I am always open for discussion.
Thomas Condon Flagstaff Hereford Stud 03 7510864
Copyright © 2015